From the feedback I was given from the crit, I have responded to that and added/changed elements in my work.

I have decided to change the age range from 7-11 to 7-10 as from my feedback, I feel its too large and could affect students during important times of their education. During the final year of Primary school, students conduct various tests which are important for the development into the new year. I feel if students used the currency during that time it would interfere with their education.

I have decided to change the way in which the tokens are processed from daily to weekly as I feel if teachers were to scan tokens in daily, it would interfere with students learning and be a tiring process for the teacher to carry out every day. Due to this change, this led me to additional changes in the way tokens work.

Tokens will be issued every day and totalled on a daily basis. The total amount each day will be combined on Friday, producing the final token of the week. This gives the student a choice of their reward for the following week.

I have integrated the colours from the tokens to the calendar to inform parents whether their child was awarded, gold, silver or bronze overall. Also, the days where the student has collected tokens will be in a different colour font to differentiate the days they received it.

As a large number of students will be handling the tokens, I have decided that they will be made out of a thin malleable plastic, to give it a laminated feel. This will reduce the number of tokens that get damaged.

My currency is school-based which means tokens will not be allowed outside of school which helps stop trading of tokens. During the school day, students are usually in one classroom and have taught lessons there, this means tokens will not be used outside of class and must stay in during lunch and break time. The only time they will have access to them is during an allocated time during each lesson.

I was able to explore all my ideas/designs to inform my peers about how my currency works. I felt this was a successful crit as I was able to explain the concept in great depth to my peers.

I received feedback from my peers to think about/add to my work:

The next and final stage is to integrate the feedback into my currency.

I have created a series of user flow diagrams explaining step by step how my interface works. As you can see they are quite simple as I have kept the number of pages at a minimum. 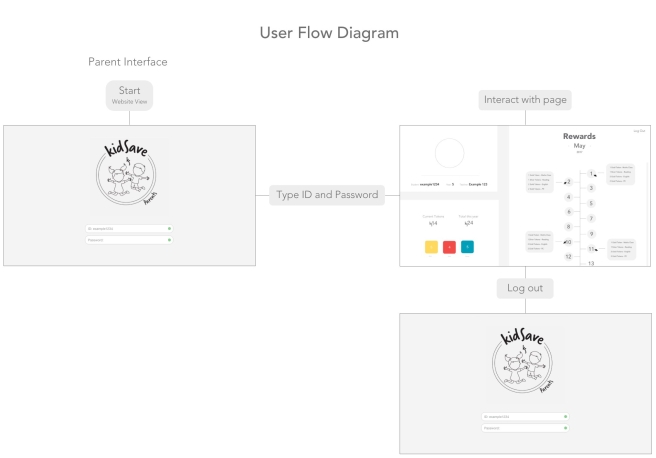 With the help of my prototypes, I have created a final version of each interface. I’ve looked further into the shapes and the size of objects within each page, to create a seamless and modern feel.

Throughout all of my interfaces, I have used various icons to help the users experience when interacting with a page as images can be quicker to understand than text. Also placing physical objects, such as tokens and using the colour scheme, gives the interfaces a connected and integrated feel when using both digital and physical formats.

As for layouts and colours schemes, I have kept it very simple, mainly using the colours from the tokens. As you can see I have kept the colours to a basic white and grey design with the additional pop of colour for the pie chart. I have done this as I wanted the user’s eyes to focus on the most important part of the page first, which is the number of tokens a student has currently. I feel this is the most important as its something the students are going to look at regularly. 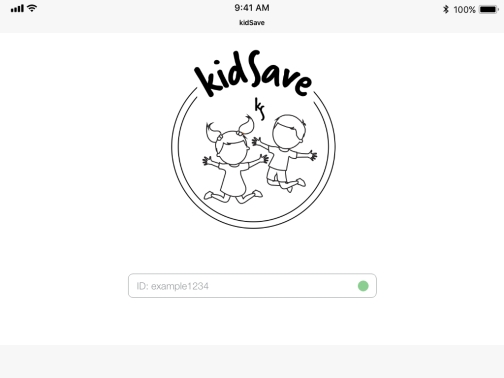 As for the teacher’s interface, I have kept it as basic as possible and it needs to be used for a large group of students. 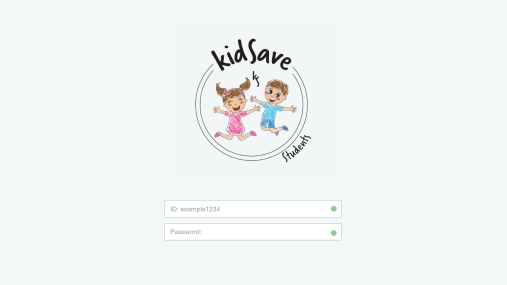 I have kept this also kept this interface simple allowing students to see only the most important information for them.

Both the student and parent interface is very similar, as they do the same function.

I have designed some key features that I wanted to add to my final interfaces.

I wanted to create a visual representation of information that filled up a page rather than text as images can be quicker to understand than text. I have shown how the token should be scanned using an example of one that will be used.

I had an idea of doing a pie chart as its easy to understand, especially for students. I didn’t want it to look overcrowded, this led to just the number and the corresponding colour to be the key focus. The title is placed in the centre along with the total amount to inform the user. It doesn’t overtake the chart due to the bright colours used.

I did have problems with picking the exact colours I wanted as they had to match not only the tokens but the interface too. I went through a series of ‘trial and error’ when finding these colours but I think works well when representing gold, silver and bronze as I have tried to select colours that I think closely links the original.

This calendar is located on the parent interface and is the key feature of the site. It is used to inform parents about what tokens there has child achieved for each lesson.

When it came to drawing up this design, I initially created it horizontally, creating a side scroll. After receiving feedback, I realized, the functionally of it may not be good as you are unable to scroll left and right with a mouse, only with a trackpad which not everyone has so redesigned it to create a verticle calender.

I wanted to use combine some of the same features, to connect with it digitally and physically, I have done this by using the colour of the tokens as the main background colour for the font, using curved edges which have been used on almost all the interfaces, and the font, Avenir which is the main body text throughout this currency. This also helped me think about proportions of text.

To begin with, I wasn’t sure how I wanted to visualize the number of tokens a student received during the academic year and decided on writing a number and title. It didn’t like the idea and it didn’t help the design aesthetically. I did some research and found some examples which led me to this idea, a line chart. I feel this is very simple but understandable design which informs the user well. There are 10 numbers (10 months) which inform students how many tokens they earned each month and their academic year. The line graphs so the gradual ups and downs the students have throughout the year.

Again, I kept the same colours and fonts for the title to integrate it well into the design but changed it for the months and made it lower case as I wanted it to link to the main text on the tokens, gold, silver and bronze. 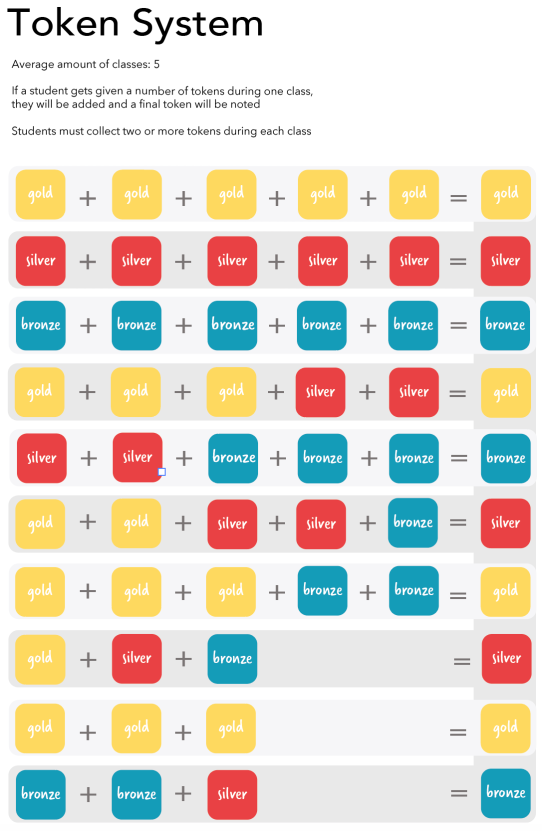 The table above shows examples of how the tokens work during each class.

Instead of numbers, gold, bronze and silver will be awarded to students instead. I feel this makes this token system more organised and easier to distribute to students. Due to this change, I will now have to re-think the way in which the systems work.

I have created a very neutral design compared my original, making the key focus of the amount rather than the colour of the token. I have included key elements of my previous design such as the rounded boxes as I wanted every interface and physical item to link together.  I have added, specific colours to the logo to correspond with the value. Although this is a physical item, I wanted the same colours throughout this project. I wanted to use more accurate colours for the gold, silver and bronze but they did not work well on the digital interface due them being metallic.  I had to experiment with various colours until I was satisfied. Also, I have made them portrait rather than landscape as I feel it has improved the design structure and uses less space allowing me to create more of a compact design.

I have kept the stamping system very similar to the first version, the only difference being the colour, I wanted this to be the same as the tokens. 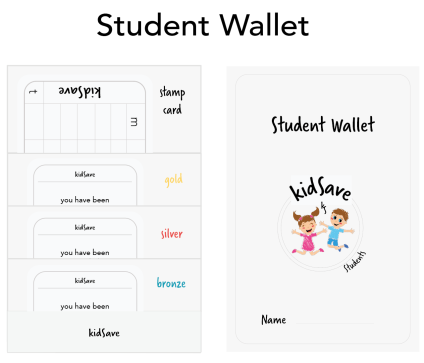 Whilst designing the tokens and stamping system, I wanted a way of keeping all the tokens together to stop the student from losing anything. This led to creating a Student Wallet.  I have used the same colour as the token as well as used the corresponding colour for each section title. Also, I have given the wallet and identity in case it gets misplaced.
November 20, 2017January 18, 2018 ~ kimronb ~ Leave a comment

kidSave is a school currency designed for 7-11-year-old students.As they go through their day working, students will be awarded gold, silver or bronze tokens due to their ability by their teacher. Their teacher will process the token(s) to keep an online record of the amount they are getting. The amount will also be noted on the student’s stamp card. Tokens will be stored in a wallet, which is given to the student. At the end of the day, the tokens are combined to create the final amount. Students will be able to pick a reward for the following day.

Below I have created some personas. This describes the audience and who uses this currency 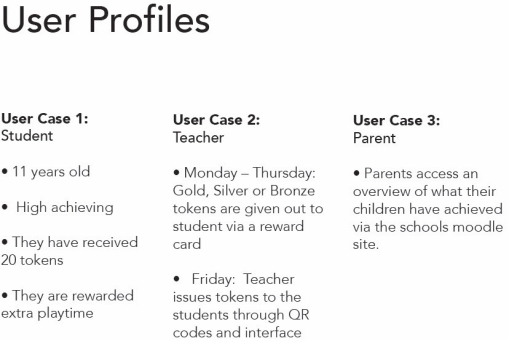 I have created a system diagram to show how the tokens are distributed by teachers.

I have created a style guide based on my own prototypes. I have analysed my prototypes further by looking at individual components.

This has helped me develop my designs further as well as other ideas that I could add.

Our brief stated that we should create more than one digital interface. This gave me another idea which I thought would be interesting. I wanted to make the logo more personal, I have done this by adding each name of the interface to the logo as it makes it more personal for the user. 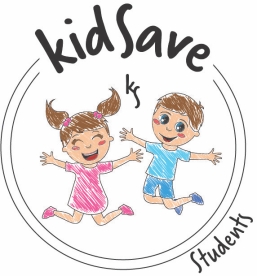 During our prototyping sessions, I received a suggestion about adding colour. I decided to add colour to the student logo as it differentiates the interfaces and links to the audience. To create the coloured look, I have used a graphics tablet.

During our lesson, we decided to show peers our prototypes and conducted user testing to receive some suggestions and opinions:

I was able to get some user testing on the tokens:

Below I have designed a prototype and interface for a student and teacher. I have kept the interface very simple, just like my previous one as I wanted it just do its main task.  The next stage is to think about colour and how I can adapt the colours to its audience.

This interface allows students to log onto their kidSave account via Moodle or their virtual learning environment and view and keep a record of the amount of tokens students have left to use or the total during the past year.
Teacher:

The parent interface is not very different from the student interface as, again it allows parents to view their child’s account, allowing them to see that each token was achieved for and how many they received. Parents will be restricted from adding any other tokens to their account.